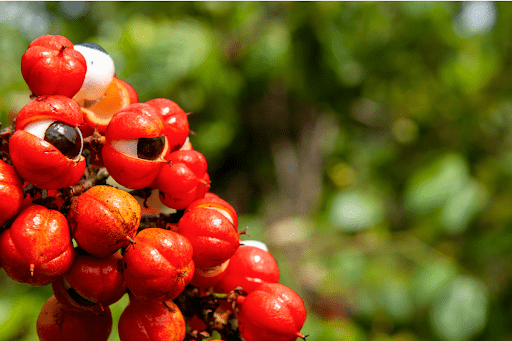 Guaraná is a flowering plant that produces berries similar to the coffee plant. It is native to the Amazon rainforest and has been used for centuries by Brazilian Indians as a source of energy. The seeds of the ripe guarana fruit are used to make a sweet syrup. This syrup is the primary ingredient in guaraná soda, a national favorite in Brazil.

The indigenous peoples of the Amazon, in particular the Satere Mawe Indians, were aware of the energizing and medicinal properties of guaraná long before it became a soft drink.

In 1669, Father João Felippe Bettenford observed how members of the tribe would consume the fruit prior to hunting. A drink made from powdered seeds mixed with water gave the hunters enough energy to feel satisfied and hunt all day. Father Bettenford also reported that the plant was often used in the reduction of fevers and headache.

Like Coca-Cola, guarana soda was first developed by a physician from Rio de Janeiro who sought to market its medicinal properties. A soft drink factory by the name of Guarana Cyrilla launched in 1906 to produce the soda on a bigger scale. Unfortunately, the naturally bitter taste proved to be unappealing to the masses, and this first endeavor was unsuccessful.

A second manufacturer, Guarana Antarctica, patented a formula that removed the astringent taste from the soda in 1921. The result was a sweet, floral and fruity soda that remains extremely popular today. This particular brand is produced in only four countries worldwide: Brazil, Argentina, Portugal, and Japan.

What Else is Guarana Used For?

Guarana has many properties that have made it a popular ingredient not just in the soft drink, but in other products as well. The seeds are naturally high in caffeine, containing up four times more of the stimulant than coffee beans. This is why you will often find “guarana” on the list of ingredients for popular energy drinks, including Red Bull and Monster.

Most describe the taste of Guarana Antarctica as tart and crisp, like an apple, and with a sweeter, berry-like after taste. It is less sweet than typical soft drinks, with 36 grams of sugar per 12 oz can (compared to 39 grams in a 12 oz can of Coca Cola).

There are 140 kcals in one can, which is comparable to a can of regular Coke. Despite guarana’s natural caffeine levels, Guarana Antarctica actually has less caffeine than Coca Cola or Dr. Pepper. 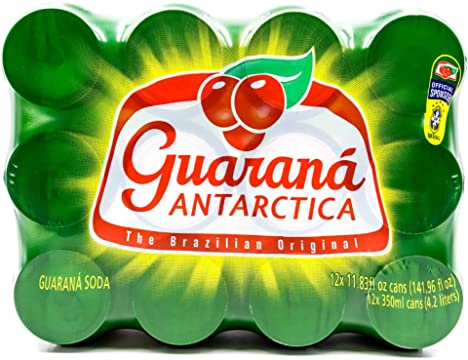 A case of Guarana Antarctica available on amazon.com.

Where Can You Buy Guarana Soda?

Guarana Antarctica is widely available in the United States at chain grocery stores, including Walmart, Safeway, and Sprouts. It can also be easily ordered online. It is delicious over ice or as a mixer in a Guaraninha, a bubbly version of the Caipirinha. In true Brazilian fashion, enjoy your drink with plenty of delicious food while watching a football match.

Come to Texas de Brazil for an Authentic Brazilian Experience

For more Brazilian customs, history, and recipes, check out our blog page. For a true taste of Brazil, visit one of our 50+ locations and enjoy unparalleled cuisine and hospitality. Or, bring the tastes of Brazil right to your door with one of our hand-curated butcher box grill packages.