What is Picanha, Brazil’s Favorite Cut of Beef?

Picanha, Brazil’s favorite cut of beef, has been a favorite in Brazil for years as an affordable yet flavorful cut of meat, especially when prepared in the traditional churrasco style. In the US, it is still relatively unknown outside of the Brazilian Steakhouse. But its unique flavor, ease of preparation, and affordability make it worthy of further exploration.

What Part of the Cow Does Picanha Come From?

The picanha cut of beef comes from an area on the rump of the cow above a fat cap. 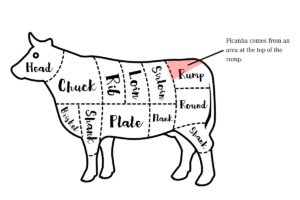 In the US, the picanha cut is known as a rump cap or sirloin cap. It may also be called a rump cover or “culotte steak.” It is not common to find this cut of meat in stateside grocery stores, where it is typically broken down into smaller cuts of meat like loin or round steaks.

This is unfortunate, because the complete picanha is a delectable, juicy cut of meat. When prepared properly, it has a taste and texture similar to sirloin: buttery, flavorful, and lean.

Where Can I Find Picanha in the US?

As mentioned above, it is unusual to find picanha in American grocery stores, even high end ones. Outside of Brazilian steakhouses like Texas de Brazil, you will need to visit a specialty butcher to request a picanha or picanha steaks. (unless you check our e-shop) It will be well worth the extra effort to find Picanha, Brazil’s Favorite Cut of Beef.

There are a few things to keep in mind when looking for a choice cut of picanha:

Dryness: there should not be much liquid coming from the picanha once it has been butchered. It should be a dry cut of meat with most of the fat in the fat cap, not visibly running through the beef. 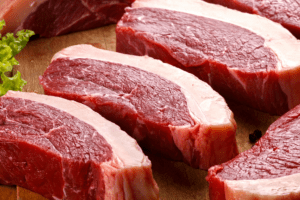 How Do You Cook Picanha?

At Texas de Brazil, we keep it simple: our picanha is seasoned with sea salt and spit grilled to medium rare perfection. No other seasoning is needed to bring out the flavors of this beef, which is sliced thick with the fat cap intact. 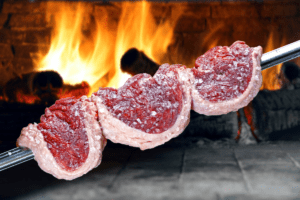 When cooking at home, you can prepare it in a similar way on a backyard grill. Allow your picanha to come to room temperature and pat dry. Slice the picanha into four or so thick cuts, ensuring you are cutting with the grain*. Season both sides with sea salt or kosher salt.

Make sure your grill grate is clean and oil it using a paper towel soaked in olive oil or lard. Preheat to about 250 degrees fahrenheit. Arrange the steaks away from direct heat on the outside edges of the grill. Close the hood and cook the steaks for about six minutes per side.

Once the steaks have cooked on both sides over indirect heat, move them to the center of the grill and sear on each side for a few minutes until the internal temperature reads 130 degrees fahrenheit (medium rare).

*This may sound unusual. The steaks are cut with the grain initially because they will ultimately be carved into smaller portions against the grain for optimal tenderness.

Do I Have to Use a Grill to Cook Picanha?

No, there are various methods you can use to cook picanha, including pan searing and oven roasting.

Pan searing is best used for individual steaks, while oven roasting is better for a whole cut of picanha. Whatever method you use, you will want to ensure you do not overcook your picanha, as it can become tough.

Heat an oiled skillet to medium high heat. Season both sides of your picanha steaks with a little sea salt. Sear each side for 1-2 minutes until a nice crust has formed. Remove the steaks and lower the heat to medium. Return the steaks and cook for an additional 3-4 minutes per side, or until you reach an internal temperature of 130 degrees fahrenheit.

Preheat your oven to 350 degrees Fahrenheit. Score the fat cap of your whole picanha and season with sea salt or kosher salt. Heat a skillet to medium high heat. Sear the picanha fat side down (do not put any additional oil) until it is crisp.

Place the seared roast and drippings into an oven safe pan. Cook for about 30 minutes, or until the internal temperature has reached 125 degrees Fahrenheit (the heat will carry over to 130-135 degrees while resting).

Allow the picanha roast to rest for fifteen minutes, then slice against the grain. 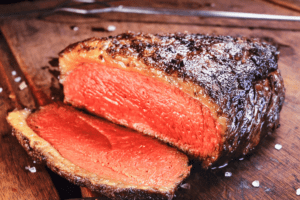 What Do You Eat With Picanha?

Picanha is a bold, flavorful beef dish. As such, it pairs well with virtually any accompaniment, from a crisp salad to garlic mashed potatoes. At Texas de Brazil, we recommend a side of our potatoes au gratin, Brazilian black beans, or a helping of potato salad with a little crispy bacon. Pair it with a glass of Texas de Brazil Private Label Cabernet Sauvignon and a slice of Brazilian cheesecake for a truly indulgent experience.