The Music of Rio de Janeiro Joao Gilberto with his classical guitar, a key element in bossa nova. Photo courtesy of npr.org

Bossa Nova has become synonymous with the country of Brazil and, in particular, with Rio de Janeiro. With its lilting classical guitar, soft beat, and smooth vocals, it seems to perfectly embody Rio’s diverse, artistic culture.

The Father of Bossa Nova

Bossa Nova emerged as a variant of Samba, a genre of music that had been popular in Brazil since the early 20th century. In the 1950s, Brazilian musician Joao Gilberto began experimenting with jazz elements and guitar rhythms that would breathe new life into the genre.

The microphone had been recently introduced to Brazil. The ability to amplify sounds meant Gilberto could emphasize subtleties and harmonies within his music that had previously been overlooked. Although the microphone allowed for such innovations in live music, the ability to record them was still very limited. Gilberto’s solution was to further simplify the overall sound, prioritizing the anti-rhythm of his guitar and his unsual vocal style.

Elizete Cardoso’s Album “Cancao do Amor Demais” is widely regarded as the first album to feature the bossa nova style.

Gilberto’s music was marked by a syncopated classical guitar whose nylon strings were plucked by hand, not with a pick. His vocals were deliberately understated so as not to overshadow the sound of the strings. Gilberto further equalized his sounds by using two microphones: one for his voice, and one for the guitar.

Gilberto’s new style of guitar first appeared in 1959 on Elizete Cardoso’s album, Canção do Amor Demais. Elizete was a renowned Brazilian actress and singer, and Gilberto himself accompanied her in two songs using his signature style. Later that same year, he would release his first Bossa album, showcasing his guitar and also his unique way of singing.

The album was a huge success and spawned an artistic movement, helmed by Gilberto and inspiring younger musicians like Sergio Mendes, whose version of Ben Jorge’s “Mas Que Nada” became one of his signature songs. The song itself was inducted into the Latin Grammy Hall of Fame 2013.

The precise origin of the name “bossa nova” as it pertains to music is unknown. However, the word “bossa” was used colloquially in the 1950s, particularly in the artsy beach scene, to describe something charming, trendy, or effortless. It can also be found as early as 1932, when musician Noel Rosa used the word in a traditional samba.

Wherever the name came from, the term eventually came to embody a “new wave” of samba, a refreshed and purified form that focused on new rhythms, classical guitar, and subdued vocals. When Gilberto passed away in 2019, Leonard Rocha wrote in his obituary that his music described a “period of intense optimism in Brazil.” The music certainly reflects a sense of nostalgia and creativity that continues to inspire artists all over the world.

Queue up your favorite Bossa Nova album and grill like a true gaucho with one of our signature grill packages, which include such favorites as flank steak, brazilian sausage, and, of course, picanha.

Alternatively, you can enjoy all your favorite churrasco dishes at one of Texas de Brazil’s 50+ locations across the country and internationally. Find the location nearest to you today!

Feijoada is a popular meal accompaniment in Brazil, where it is considered a national dish. The name is derived from the Portuguese feijão, meaning “bean.” It consists of black beans that have been slowly stewed with pork and beef.

Like much of Brazilian cuisine, feijoada is a fusion of cultures and tastes. It is an especial nod to the country’s African roots, with the most widely accepted origins of the dish being attributed to the slaves of the sugar plantations. The dish is reminiscent of the pork and beans found in the American South, and has even been described as a Brazilian “soul food.” It is often paired with greens, rice, and orange slices.

Variations of the basic ingredients for the Brazilian black beans exist all over the country, with additives like sausages, rice, and various seasonings. Some recipes call for pig’s ears, pig’s feet, or other bits that might otherwise be thrown away. You are more than welcome to use whatever meat trimmings you like. For our recipe, we like to use beef short ribs, bacon, Brazilian sausage, and Portuguese linguica sausage.

To finish this dish, we top the beans with crispy, buttery farofa. Farofa is a bread crumb-like topping made by pan-frying cassava flour in plenty of butter and oil. (In Bahia, it is traditionally made using dende oil, or palm oil, which gives it a deep yellow color.) For additional flavor, our farofa is crisped with onions, garlic, bacon, and salt and pepper.

Cassava and tapioca flour are gluten free, so farofa can also be used as an alternative to traditional bread stuffing for your holiday meal. Add raisins, chopped nuts, and apples for texture and sweetness and serve with turkey or roast picanha for a truly special dinner.

*You can substitute chorizo if you cannot find Brazilian sausage, but it will have a different flavor. You will also want to pre-cook the chorizo to render some of the grease out.

**If you can’t find linguica, you can substitute another smoked sausage, such as kielbasa 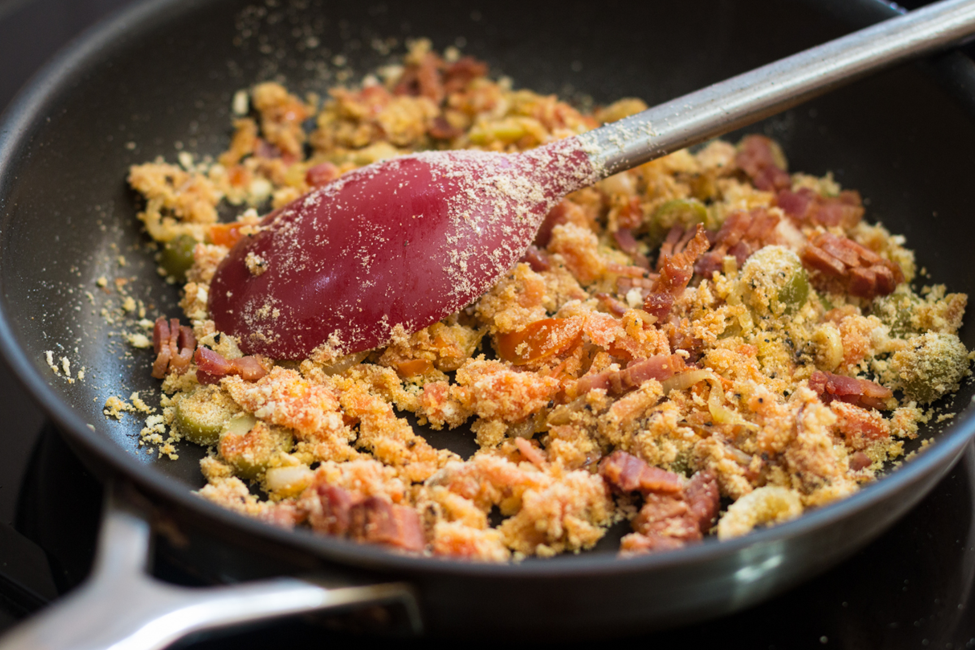 How to Eat your Feijoada

For a traditional feijoada completa, serve your black bean stew over rice and topped with the Farofa, fried kale or collards, and orange segments. It is a hearty meal in its own right, but can also be a delectable side dish at your next family or holiday get-together. Enjoy with an ice cold beer, caipirinha, or fruit juice.

Let us do the cooking for you! Feijoada black bean stew is just one of the many delicious and traditional side dishes on our menu. Visit one of our 50+ locations to try our churrasco-style meats and accompaniments in a lively and welcoming atmosphere.